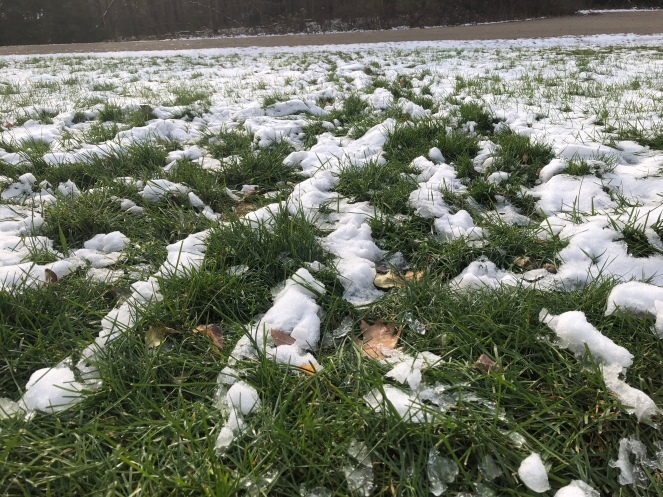 The other day I sat out in the woods for bow hunting season. I readily admit to being a little fair-weather hunter. The freezing cold is not my favorite! As I stood in the light drizzle and the wind blowing, I could hear thunder rolling. Thunder in November isn’t the norm. The sky and the wind were impersonating a spring storm but the trees overhead told the truth. The colors of the leaf canopy that swayed above me in gold and red and brown and the accumulated leaves on the ground said we were fully into fall. Michigan in November is so conflicted. The leaves struggle to let go till the cold settles in and visions of warm sunny autumn are spoiled by rain and cold and sometimes even snow. The cold, wet, heavy white stuff graced us the other way in what should’ve been a dusting, but turned out to be about four inches of good packing. The kids were thrilled to don their summer-forgotten snow clothes and build a few snowmen and eat the frozen gift from the sky.

The first snow usually melts quickly. And in general, this didn’t disappoint. But today as I drove home from church I noticed snow still on the hood and top of my sons car as he drove behind me. Aside from making a mental note to remind him to clear his car better, I thought it funny as we drove in the city that others might wonder why a car still had snow on it several days later.

Now in his defense we live atop the highest point in our county and it is always colder and snowier up there than down in the city. Often I drive home and everything is clear in the city and yet my own street is snow covered and the last to melt in the spring. Today after I turned into the freeway, I was struck by the snow on the sides of the road. It was very sparse and only existed in the laid down patches of grass. It wasn’t everywhere as it had been a few days earlier. It was as if someone had held the snow in their hand and blew it across the grass, leaving it in all the low spots.

There was just enough left to know snow had been there and left it’s mark even though no big evidence still existed. I thought of my own relationship with Jesus at that moment. Could anyone see the evidence of Him in me? While none of us has seen God himself, can the evidence of Him and the principles He taught in His word still be seen in me? Like the snow on my son’s car that was out of place in the city, would anyone look at me and see a pile of love and grace on the hood of my life and notice a difference from the world in which we exist. God’s imprint on our lives should be real and noticeable, not cloaked by the conflict around us. It should leave a lasting tattoo on our hearts that says “Jesus is evident here”.

It was a good reminder today to ask myself “where’s the evidence?” I don’t mean the scientific evidence of God’s existence, but where is the evidence of kindness, goodness, mercy and self-control that proves He lives in me. The Bible is clear, if He lives in us and if we are in Him, there will be evidence! The fruit that comes from knowing and loving and following Him will be real!

When the wind blows and “stuff happens,” do people look at you and still say “Jesus lives there.” Because unlike my little ones who recently took a bag of chocolate chips and ate it all so no one would know, there should be evidence!

“But the fruit of the Spirit is love, joy, peace, forbearance, kindness, goodness, faithfulness,”

View all posts by eightofus4him